‘Breathing Tides’ for oboe & shō from NMC Debut Disc Series has been included in the Ryuichi Sakamoto & Dai Fujikura Selections, (book with CD) see link below. 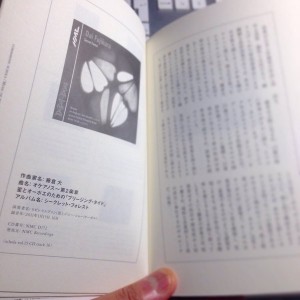 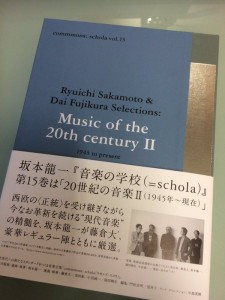 He quickly established himself on the international scene, arousing the interest of Pierre Boulez, who commissioned him to compose an orchestral work for the 2005 Lucerne Festival.

Pending an imminent release of monographic CDs from Kairos, the five recorded works
on this CD allow us to discover a fresh and original language, born of an unusual mixture of
disparate influences: love of German romantic music, evident in the emotional climate of all
his works, soundtracks from horror films, from the analysis of the scores of Ligeti, Berio,
Stockhausen, Boulez; the Japanese avant-garde, Toru Takemitsu, Toshi Ichiyanagi,
Toshiro Mayazumi, Maki Ishii, Joji Yuasa, from ancient Gagaku court music (which Fujikura discovered not in Japan – amazingly enough – but in Ferienkurse Darmstadt!) to electronic music.

Fujikura has crafted a virtuosic music, transparent and sensual, from refined timbral textures but without being ‘exotic’ for its own sake.
If anything, his works evoke the forces of nature, also with a sense of the mythological, as in the great cycle Okeanos, where he aims to blend the timbres of oboe, clarinet and viola, with those of the sho and koto, in a universe of kaleidoscopic sound, reverberant and full.

No world of nature is evoked in Secret Forest, the title of the CD, from 2008 for large ensemble, and seems to evoke birdsong and the swarming of insects. Instead for Phantom Pulse for percussion, a biting and aggressive character, based on a metric irregular pulse, and insistent rhythmic modulations.

Completing the CD are two short solo pieces, both from 2006: the virtuosic and percussive Eternal Escape, for cello, and Rubi(co)on, subtitled “100 notes for clarinet only. ” 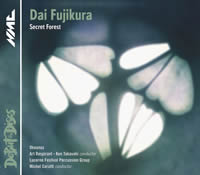 Okeanos is proud to be part of the exciting debut disc series launched by NMC and released in June 2012, see further details on the discography page. Okeanos features on Dai Fujikura’s CD ‘Secret Forest’ with his complete Okeanos cycle, composed especially for them. Tracks also include the solo clarinet piece Rubi(co)n and the virtuoso cello work Eternal Escape as well as Secret Forest with Art Respirant and Phantom Pulse with the Lucerne Festival Percussion Group. ‘Sakana’ featuring Kate Romano was selected by Graham McKenzie for the 2012 Huddersfield Contemporary Music Festival’s sampler CD . ‘Secret Forest’ was NMC’s 2nd top-selling CD for 2012/2013. It was also number 1 in the Classical Charts at the Tokyo Tower Record Store.

“But it’s the closing work, Okeanos, that shows off Fujikura’s skill best, the introduction of sho & koto contributing in no small part to its deeply hypnotic (& at times gorgeous) five movements.”

“When NMC first invited me to curate a sampler CD from their catalogue and archive I knew instantly that I would include a track from one of the label’s latest releases – Secret Forest – a portrait CD of composer Dai Fujikura. This is an astonishingly confident collection of work from a young composer who must now, even at this relatively early stage, be considered an important and original voice. Any follower of Fujikura on Twitter will be aware of the global interest in his work. For me what sets Fujikura apart from his peers, however, is a refusal to be pigeon-holed and the extent to which he is willing to embrace risk. His music is informed by a wide and diverse range of interests and collaborative practice which includes rubbing shoulders with intelligent pop (David Sylvian), live remix (Jan Bang), and the cream of British improvisation (Evan Parker, John Butcher). In truth I could have happily selected any of the tracks from this consistently superb recording, but in the end I found myself returning frequently to Sakana from the Okeanos cycle, both the version included here featuring the wonderful Kate Romano on clarinet, and the fragile and haunting version for solo tenor saxophone, performed by Masanori Oishi on Fujikura’s own web site.” Graham McKenzie – Director, Huddersfield Contemporary Music Festival.  http://www.nmcrec.co.uk/hcmf2012

Okeanos gratefully acknowledges the generous funding from The Great Britain Sasakawa Foundation and the Guildhall School of Music & Drama without which this project would not be made possible.